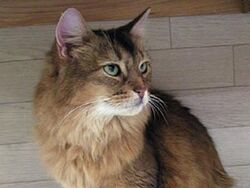 The Somali is a long-haired Abyssinian. The breed appeared in the 1950s from Abyssinian breeding programs when a number of Abyssinian kittens were born with bottle-brush tails and long fluffy coats. Abyssinians and Somalis share the same personality (active, intelligent, playful, curious) and appearance. The only difference between them is the fur length and therefore the amount of grooming required. Unlike most long-haired cats, Somalis shed very little excess hair. Their coat is generally shed en masse, or "blown", once or twice a year, rather than constantly shedding like a Persian or other long-haired cat.

Somalis have a striking, bushy tail, which, combined with their ruddy coat, has earned them the nickname of "fox cats" in some circles. In addition to the fluffy tail, the Somali breed features a dark (color depending on the body color) stripe down its back, large ears, a full ruff and breeches, contributing further to the overall "foxy" look. Their coats are ticked, which is a variation on tabby markings, and some Somalis may show full tabby stripes on portions of their bodies, but this is seen as a flaw, and tabby Somalis are only sold as neutered pets. The only tabby marking on a show Somali is the traditional tabby 'M' on the middle of the forehead. Like Abyssinians, they have a dark rim around their eyes that makes them look like they are wearing kohl, and they have a small amount of white on their muzzles and chins/throats. White elsewhere on their bodies disqualifies them from show-status. 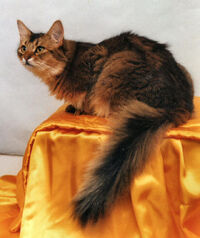 Due to the loss of many Abyssinians during World War II, cats of unknown background were used to rebuild the breed and it is likely that cats carrying the recessive longhair gene made their way into the breeding population then. The introduction of the longhair gene may be much earlier as of the 12 cats registered in 1905 by the National Cat Club, all had at least one parent of unknown origin. Some though believe that the longhaired Abyssinians were the result of a spontaneous mutation rather than an expression of the recessive longhair gene.

The first Somalis were longhairs that appeared in litters of Abyssinian kittens. In the 1940s, a British breeder named Janet Robertson exported some normal Abyssinian kittens to Australia, New Zealand, and North America. Descendants of these cats occasionally produced kittens with long or fuzzy coats, and in 1963, Mary Mailing, a breeder from Canada, entered one into a local pet show. Ken McGill, the show's judge, asked for one to breed from. Despite popular belief, the cat is an Australian breed, not Somalian. The official first Somali was Mayling Tutsuta, McGill's cat.

An American Abyssinian breeder, Evelyn Mague, also received longhairs from her cats, which she named Somalis. Don Richings, another Canadian breeder, used kittens from Ken McGill, and began to work with Evelyn. As of the late 1970s, the Somali was fully accepted in North America, then later in the 1980s they were accepted in Europe. By 1991 the breed was accepted worldwide. 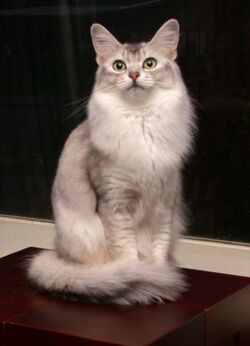 The essence of the Somali cat is ticking - each hair is ticked multiple times in two colours. The Usual or Ruddy Somali is golden brown ticked with black. There are 28 colours of Somali in total (some organisations accept only some of these colours). All organisations accept Somalis in usual/ruddy, sorrel/red, blue, and fawn. Most clubs recognise usual/ruddy silver, sorrel/red silver, blue silver, and fawn silver. Other colours that may be accepted include chocolate, lilac, red, cream, usual-tortie, sorrel-tortie, blue-tortie, fawn-tortie, chocolate-tortie, lilac-tortie, and silver variants of all the above colours.

In the 1990s, many purebred Somalis had significant dental problems due to congenital problems magnified by inbreeding. As a result, many Somali cats had to have all their adult teeth removed. (Dental abscesses, especially below the gumline, can cause cats to stop eating, which often leads to hepatic lipidosis, a condition that's often deadly.) As of 2006, the CFA breed standard makes no mention of this, and breeders say they've made much progress in breeding out this unfortunate trait.

The Somali breed along with its parent breed the Abyssinian have been found to suffer from Pyruvate kinase deficiency (PKDef), with around 5% of the breed carrying the defective gene. There is now a genetic test to identify this recessive disorder within the breed, and as such all breeding stock should be tested to ensure no more affected kittens need be produced

Retrieved from "https://dogs-cats.fandom.com/wiki/Somali?oldid=5765"
Community content is available under CC-BY-SA unless otherwise noted.