This is a Featured article! Featured articles are some of the best articles which Dogs and Cats Wiki has to offer. It had been voted by our community's user as an example of our end goals. If you would like to help us promote more articles you could vote here.

The Shih Tzu is a dog breed of small companion dog of very ancient type, with long silky fur. The breed originated in China, possibly Tibet. The name is both singular and plural. 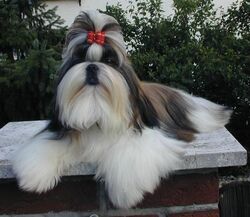 Shih Tzu (simplified Chinese: 狮子狗, traditional Chinese: 獅子狗, pinyin: Shīzi Gǒu, Wade-Giles: Shih-tzu Kou, literally Lion Dog) is the Chinese name rendered according to the Wade-Giles system of romanization in use when the breed was first introduced in Europe. The Chinese pronunciation is approximately SHIRR-dzə. The name translates as Lion Dog, so named because the dog was bred to resemble the lion as depicted in traditional oriental art, such as the Chinese guardian lions. The Shih Tzu is also often known as the Xi Shi Quan (西施犬), based on the name of Xi Shi, regarded as the most beautiful woman of ancient China and less often, the Chrysanthemum Dog, a nickname coined in England in the 1930s. The dog may also be called the Tibetan Lion Dog, but whether or not the breed should be referred to as a Tibetan or Chinese breed is a source of argument, the absolute answer to which may never be known. 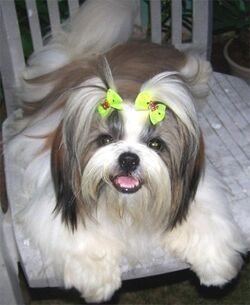 A small dog with a short muzzle and large deep dark eyes, with a soft long, double coat. The Shih Tzu stands no more than 10 1/2 inches (26.7 cm.) at the withers and with an ideal weight of 10 - 16 lbs (4.5 - 7.3 kg). Drop ears are covered with long fur, and the heavily furred tail is carried curled over the back. The coat may be of any colour, although a blaze of white on the forehead and tail-tip is frequently seen. The Shih Tzu is slightly longer than tall and dogs ideally should carry themselves with distinctly arrogant carriage.

The traditional long silky glossy coat that reaches the floor requires daily brushing to avoid tangles. Although the long coat is beautiful, often the coat is clipped short to simplify care, in a puppy clip. For conformation showing, the coat must be left in its natural state, although trimming for neatness around the feet and anus is allowed. Because Shih Tzu noses are small and flat, owners often wipe the dog's face with a damp paper towel to remove food remnants after the dog has eaten a meal. Shih Tzu may be trained to drink out of a water bottle. The water bottle keeps the face clean and dry preventing red yeast from growing on the Shih Tzu beard and moustache. Owners often tie strands of hair from the Shih Tzu's head into a pony tail that sticks up. 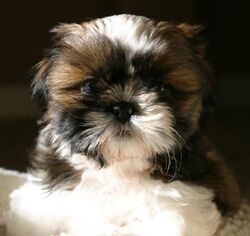 Recent DNA analysis confirms that the ancestors of today's Shih Tzu breed are among the most ancient of dog breeds. Ludvic Von Schulmuth studied the skeletal remains of dogs found in human settlements as long as ten thousand years ago. Von Schulmuth created a genealogical tree of Tibetan dogs that shows the "Gobi Desert Kitchen Midden Dog", a scavenger, evolved into the Small Soft-Coated Drop-Eared Hunting Dog which evolved into the Tibetan Spaniel, Pekingese and Japanese Chin. Another branch coming down from the Kitchen Midden Dog gave rise to the Papillon and long-haired Chihuahua and yet another Kitchen Midden Dog branched to the Pug and Shih Tzu. The Shih Tzu was almost completely wiped out during the British invasion of China. Seven males and seven females were saved. Today, all Shih Tzus can be traced back to one of these dogs.

There are various theories of the origins of today's breed. Theories relate that it stemmed from a cross between Pekingese and a Tibetan dog; that the Chinese court received a pair as a gift during the Tang Dynasty (618 – 907 AD) and that they were introduced from Tibet to China in the mid - 18th century (Qing Dynasty. Dogs during that time were selectively bred and seen in Chinese paintings). The first dogs of the breed were imported into Europe (England and Norway) in 1930, and were classified by the Kennel Club as "Apsos". The first European standard for the breed was written in England in 1935 by the Shih Tzu Club. The dogs were recatagorised as Shih Tzu. The breed spread throughout Europe and was brought to the United States after World War II, when returning members of the US military brought back dogs from Europe. The Shih Tzu was recognized by the American Kennel Club in 1969 in the Toy Group. The breed is now recognized by all of the major kennel clubs in the English-speaking world. It is also recognized by the Fédération Cynologique Internationale for international competition in Companion and Toy Dog Group, Section 5, Tibetan breeds. 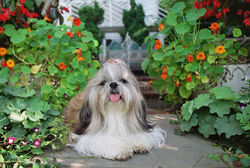 The Shih Tzu has a long, dense, and abundant double-coat. The luxurious and profuse outer-coat often sweeps the ground, and may be slightly wavy. The under-coat is wooly and soft in texture. The long hair on top of the head is typically placed into a topknot to prevent eye irritation. Their long coats make them look like they have just g otten their hair done. The Shih Tzu coat varies widely in colors. They are minimal shedders and are considered hypoallergenic.

The Shih Tzu is often referred to as a "small lion". They originated in Tibet, but are most associated with China where they were highly revered as a palace pet and prized companion. The Shih Tzu is an active, happy, and affectionate breed.

The Shih Tzu is small, sturdy, and intelligent. They carry themselves with a noble and proud posture befitting their aristocratic ancestry. One of their most valued characteristics is the eye, which exude warmth and a human-like quality. The Shih Tzu is the least delicate of the toy breeds.

The Shih Tzu is first and foremost a companion. They love nothing more than being indoors with their family. This breed gets along very well with older children and other pets. They are outgoing and self-assured, keen and alert. They make excellent watchdogs. They do not do well being separated from their owners and may become destructive if left alone for extended periods of time. They are docile and quiet, but they also love to play. The Shih Tzu is spunky and can be obstinate at times. They expect to be treated as royalty and are easily spoiled.

The Shih Tzu requires extensive grooming. They need brushed daily to prevent knots, tangles, and mats. They need to be bathed monthly. They are not suited for humid climates. It is important to keep their eyes and ears cleaned. Their eyes are particularly sensitive. They are prone to kidney disease and slipping kneecaps. The Shih Tzu's short muzzle makes it exceptionally prone to snoring and wheezing problems. Dental hygiene is crucial to prevent tooth loss. They tend to gain weight easily and must not be overfed. 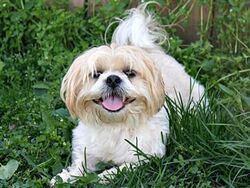 The Shih Tzu may be difficult to housetrain. The crate method works best. Although they are eager to please, and quick to learn, this breed's stubborn streak requires persistence and consistency. They do not respond to harshness or punishment. The Shih Tzu does very well in obedience training provided it is low-key and motivational.

The Shih Tzu enjoys short daily walks or vigorous indoor play sessions and games. They are very well suited for apartment or condominium dwelling. However, they love to play outside, so a small fenced yard is ideal.

If you are looking for Shih Tzu puppies for sale from reputable Shih Tzu breeders or to adopt a Shih Tzu from a Shih Tzu rescue then make sure you understand as much about the dog breeds you are interested in as you can. Every puppy breed is different. Begin your research by reading the breed information about the Shih Tzu puppy above. Search our dog breeds section to find Shih Tzu puppies, dogs and puppies that make great pets.

A number of health issues, some of them hereditary, have been found in individual Shih Tzu are listed below. There is no data on the percentage of dogs with these ailments.

Some health issues in the breed are portosystemic shunt of the liver and hip dysplasia in standard sizes.

Shih Tzus are brachycephalic (short-muzzled) dogs and they are very sensitive to high temperatures. Many airlines that ship dogs will not accept them for shipment when temperatures at any point on the planned itinerary exceeds 75 degrees Farenheit (24 degrees)

The life span of a Shih Tzu is 13 - 18 years although some variation from this range is possible.

There is no such thing as a teacup Shih Tzu nor a toy sized Shih Tzu. Imperial Shih Tzu is a term used by breeders to sell Shih Tzu that are below healthy standard size. These tiny dogs, often less than 50% of the recommended minimum size, are prone to serious health problems and may not live a full life span. Many are created by breeding the runt of one litter to the runt of another litter. Most breeders who insist that Imperial Shih Tzu is a legitimate breed of Shih Tzu could possibly be puppy mill breeders. Be sure you ask to see the dam, sire, kennels and play areas before spending your money on an "Imperial".

There is a difference between the American Kennel Club and the Kennel Club (UK) Shih Tzu. 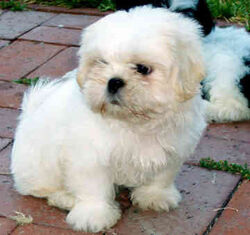 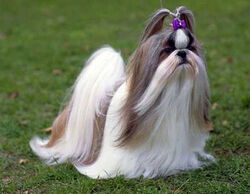 A crossbreed or dog hybrid is a dog with two purebred parents of different breeds. Dogs traditionally were crossed in this manner in hopes of creating a puppy with desirable qualities from each parent, but when two different breeds are mixed, there is no way to know which traits will be inherited from each parent. For pet dogs such as the Shih Tzu, crosses are done to enhance the marketability of puppies, resulting in "Designer" dogs with portmanteau names such as Shih-Poo (a Shih Tzu crossbred with a toy Poodle). It is fashionable to merchandise crossbreed and mixed breed dogs with the word hybrid, which implies two different species, but all Shih Tzu and Shih Tzu crosses are of the species Canis lupus familiaris. As with all dogs born of parents who are not the same breed, "designer" dogs are not purebreds, and therefore are not eligible for purebred registries such as the American Kennel Club. 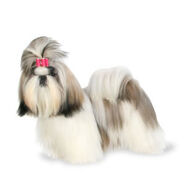 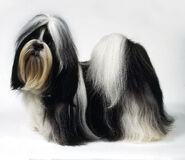 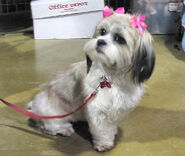 Shih Tzu on a walk. 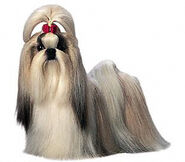 A Shih Tzu in the country.
Add a photo to this gallery
Retrieved from "https://dogs-cats.fandom.com/wiki/Shih_Tzu?oldid=7686"
Community content is available under CC-BY-SA unless otherwise noted.