The Maine Coon is the largest breed of domestic cat and one of the oldest natural breed in North America. The breed originated from the United states. The Maine Coon has a long and thick luxurious coat with a body structure to match. It is a large cat and very much recognized as a CFA breed (CAT FANCIERS ASSOCIATION). The Maine Coon is a breed which originated from cold weathered regions and so is adaptable to cold climates, though the high density of the fur should be reduced in hot climates. 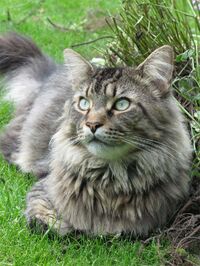 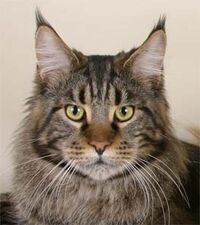 The Maine Coon originated in the state of Maine, where it is the official State Cat, but there is no factual history surrounding it, only theories and folktales. One such theory involves Marie Antoinette, Queen of France, before she was beheaded in the 1700's. It states that Marie attempted to escape France with the help of New England seaman, Capt. Clough. She put all favorite possessions on the boat, including her six prized Turkish Angora cats. But Marie was captured while the cats made it safely to the state of Maine, where they breed with other short haired cats to create the modern breed of the Maine Coon today.

The Maine Coon has a very long and thick, luxurious and soft coat which requires high maintenance. Both the upper and lower coat are thick and should be demated from mats by regular grooming. In hot climates, the density of the coat (thickness of the coat) should be cut down to prevent over heating and making the cat uncomfortable, since the coat was designed to withstand cold climates in highland areas.

For this breed, grooming is a high cause of concern as the coat could very easily become matted if left alone for more than a week. The breed must receive regular grooming four days a week minimum. The coat will also need to be washed once a month to keep the fur healthy.

The Maine Coon is often given the title "Gentle Giant", which is a good accurate description. The breed is very friendly and tolerant of children and other animals. It is very out going and does not require a lot of attention seeking. It is also #3 on the Top 10 most popular cats list. The breed being large should be handled by owners experienced enough to handle it. The Maine Coon is a breed very attached to his/her owners and their home.

Retrieved from "https://dogs-cats.fandom.com/wiki/Maine_Coon?oldid=8005"
Community content is available under CC-BY-SA unless otherwise noted.