The Kuvasz (pronounced Kuvas) is a dog breed of the ancient Hungarian origin. Mention of the breed can be found in old Hungarian texts. It has historically been used to guard livestock, but it has been increasingly found in homes as a pet over the last sevently years.

The Kuvasz is a large dog with a dense double, odorless coat which is white in color and can range wavy to straight in texture.

Although regarded today as one of the Hungarian breeds, the Kuvasz's origins actually lay with a nomadic tribe and may have its true origins from Mesopotamia along with domestic sheep and goats.Later, during the 15th Century, the Kuvasz became a highly prized animal and could be found in the royal court of King Matthias Corninus. Kuvasz puppies were given to visiting dignitaries as a royal gift, and the King was said to have trusted his dogs more than his own councilors. After the king's death, the popularity of the breed among the nobles waned but it was still frequently found in its traditional role of protecting livestock.

The Kuvasz's stiff, dense coat, growing up to 15 cm (6 inches) in length, does not require any special grooming. It needs to be brushed once a week or, better still, every two or three days. For standard grooming purposes, use of a grooming rake or a pin-brush with rounded pins is recommended. To remove stubborn knots, use a curry comb or a large-toothed comb. During the spring and autumn the Kuvasz moults (also known as shedding), and he will lose copious amounts of hair very quickly. Frequent brushing is therefore needed to keep his coat tidy. A Kuvasz should not smell or have an odor; such is usually a sign of illness or a poor diet.

The Kuvasz is an intelligent dog and is often described as having a clownish sense of humor which can last throughout their adolescence and into adulthood.They are intensely loyal yet patient pets who appreciate attention but may also be somewhat aloof or independent, as well as thoroughly cunning, particularly with strangers.Given their intelligence, constant awareness of their surroundings, as well as their size and strength, they can be quite impressive in this role. A Kuvasz should be courageous, disciplined and stable, while hyperactivity, nervousness and shyness are to be faulted.

A Kuvasz and it's puppy.

A Kuvasz at a dog show. 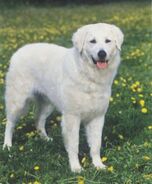 Add a photo to this gallery
Retrieved from "https://dogs-cats.fandom.com/wiki/Kuvasz?oldid=7802"
Community content is available under CC-BY-SA unless otherwise noted.