The Abyssinian (Pronunciation: /æbəˈsɪniən/) is a well-known breed of domesticated cat with a distinctive ticked coat. There are many stories about its origins, often revolving around Egypt, but the actual origins are uncertain. The Abyssinian has become one of the most popular breeds of shorthair cat in the USA. 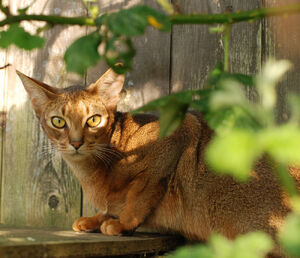 The name 'Abyssinian' refers to Ethiopia, but most of the stories about the origins of Abyssinians refer to Egypt. Genetic research suggests the breed originated near the coast of the Indian Ocean, where colonists may have purchased animals from wild animal traders as livestock or pets. The breed was developed in the United Kingdom.

The breed is sometimes believed to have originated from one Egyptian female kitten named Zula, who was taken from a port in Alexandria by a British soldier and brought to England. This theory is not established because there is no solid link between Zula and the cat first listed as an Abyssinian in 1882.

Many sources repeat the story that the Abyssinian breed is a few thousand years old and comes from Ancient Egypt, as the cats resemble those in ancient paintings. There are also stories that wild 'Abyssinians' live in parts of North Africa today.

The Abyssinian's body is of medium length, lithe and with well-developed muscles. They are a skinnier breed of cat. The legs are slender in proportion to the body, with a fine bone structure. The paws are small and oval. The Abyssinian has a fairly long tail, broad at the base and tapering to a point. 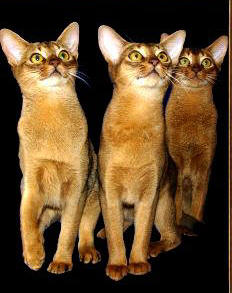 The head is broad and moderately wedge-shaped, with almond-shaped eyes that range from gold, green, hazel or copper. The nose and chin usually form a straight vertical line when viewed in profile. The Abyssinian's alert, relatively large ears are broad and cupped at the base, and moderately pointed at the tips, where tufts of hair are commonly seen. Large ear tufts are viewed as a must for show breeds. An M-shaped marking is sometimes found in the fur on the forehead. The "M" shaped marking, also referred to "frown lines", appear above an Abyssinian's eyes. They have markings, most often referred to as "mascara lines", appearing from the corners of their eyes.

The coat is medium-length, dense, and silky to the touch. The Abyssinian and a similar long-hair breed called the Somali, have coats that are unusual enough to catch attention. These felines owe their special coat to one dominant mutant gene known as Ta. Each hair has a base color with three or four darker-colored bands; the hair is the lighter color at the root, and the darker "ticking" color at the tip. This ticking is found only in the Somali, Abyssinian and Singapore.

The first cat to have its entire genome published was an Abyssinian named Cinnamon.

The original Abyssinian coat colour is known as 'Usual' in the United Kingdom and as 'Ruddy' elsewhere. The coat has a warm reddish-brown base, with black ticking. The feet and the backs of the hind legs are always black. 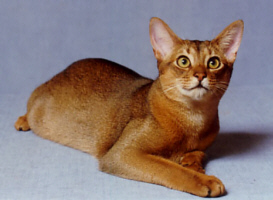 Silver Abyssinians are a separate group among the breed. Although this colour has been in existence for decades, it is not recognised by the Cat Fanciers' Association, the world's largest registry of pedigreed cats. In Silvers, the undercoat is always a pure silvery white. The markings include black, blue, warm dark cream and cinnamon. Purely Silver Abyssinians are difficult to breed because they sometimes have undesirable tan patches in the coat. In addition to this, any spots in the coat show up more clearly on a silver coat. Rare colours include the Tortoiseshell, Red, Cream, Chocolate and Lilac, which are all bred on a small scale in Holland and the UK. Abyssinian kittens are born with dark coats that gradually lighten as they mature. It usually takes several months for the final coat colour to be established.

Abyssinians are extroverted, extremely active, playful, willful and intelligent. They are arguably the most active breed of cats. They are usually not "lap cats", being too preoccupied with exploring and playing. They are popular among breeders and owners, and can be very successful show cats. Not all Abyssinians are shown, however, because the color and type standards are very exacting, and because some are shy towards strangers and timid in public. They have quiet, engaging voices.

Abys, as they are affectionately referred to by their fans, need a great deal of interaction with the family to keep them happy and can get depressed without daily activity and attention. They generally get along well with other cats, although they need their space and the females can sometimes be irritable around other cats. Abyssinians are known for their curiosity and enjoy exploring their surroundings, including heights. They are sensible cats that do not take unnecessary risks. As one might expect from such an intelligent and physically capable breed, Abyssinians are known to be formidable hunters. They adore toys and can play for hours with a favorite ball. Some play fetch.

Community content is available under CC-BY-SA unless otherwise noted.
Advertisement